What does uncoupling of hospitalisation from infection numbers mean for an coronavirus outbreak? 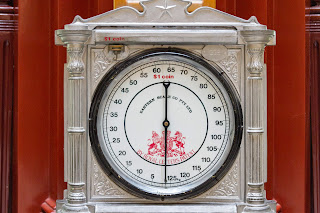 About four-fold less risk of going to hospital.

Many recent discussions about the coronavirus epidemic and the emergence of the Omicron variant mention the uncoupling of severe disease from initial infection.

It takes a bit of hard effort to work out what the concept of uncoupling actually means.

It seems to the Pundit that it means a weakening of the link between infection and severe disease.

When it comes to epidemiology the link is represented by a percentage or ratio of severe disease outcomes to total initial infection events.

Some people even go as far as criticising the use of the word "uncoupling" in these conversations. It is simply a decreased yield of bad outcomes they say.

That's true, but other people find discussion of yields of hospital or ICU patients to be intimidating jargon.

To make progress on this, the Pundit has lined up graphics to illustrate what the concept of uncoupling means using actual epidemic examples.

The first and the second Victorian Covid-19 outbreaks compared with one another.

Pundit lined up a well coupled coronavirus 2020 outbreak and compared it against another, 2021 coronavirus outbreak where hospitalisation has become partly uncoupled from infection.

The graphs below use information from the two major coronavirus outbreaks in Victoria, Australia, the second of which, in 2021 started with a Delta variant of SARS-2 coronavirus. 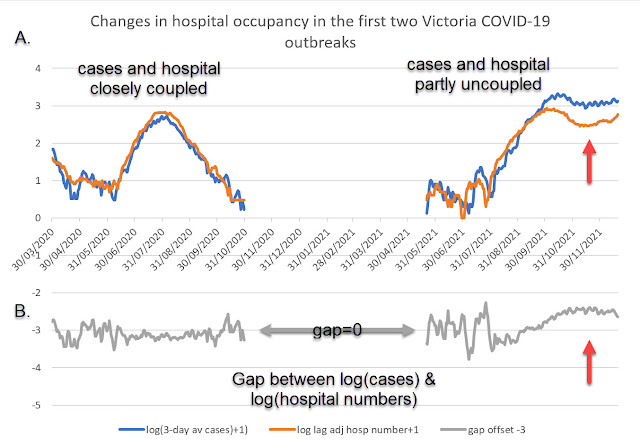 The top panel A shows the main comparison between the first (left) in the second (right) outbreaks.

Blue is average daily cases and orange is hospital occupation each day as number of COVID-19 patients.

Hospital number are adjusted for the lag in timing of  hospitalisation after infection was detected, by aligning the peak of hospital numbers of the first outbreak with the peak in daily infection numbers. This involves shifting the orange curves 20 days earlier on the horizontal axis for both outbreaks.

The vertical axis is a logarithmic scale.

Blue and orange closely overlap in the 2020 outbreak.

This way of aligning graphs illustrates that in the first outbreak, daily case numbers (blue) are an excellent predictor of hospital occupancy (orange) 20 days later (corresponding approximately to the time that the recorded daily infected cohort leave hospital).

In an intuitive sense, one could describe the two curves as being closely coupled.

On the lower panel B, the vertical distance between the two curves are plotted in grey, and the logarithm numbers are offset by subtracting 3, to move the grey curve away from the other coloured curves.

During the main period of the first outbreak, the grey line is approximately constant. Since the difference between 2 logarithms is the logarithm of a division mass operation, this constancy of a difference of logarithms indicates that hospital numbers are a constant percentage of the daily number of cases. In other words the yield of severe disease from infections remains constant.

This fits in with the argument mentioned above that discussion of yields or percentages of severe disease it is a better way of discussing this uncoupling behaviour.

In any case, in 2020 Victoria there is close overlap of hospitalisation and case numbers if you make a sensible allowance for the lag between the two types of event.

A different type of behaviour is shown in the second outbreak, shown in panel A on the right.

And that outbreak initially the curves are superimposed orange on blue, but progressively during the outbreak the orange curve for hospital numbers departs from the blue curve. This curve behaviour is what is referred to as uncoupling.

The grey line below shows the progressive increased gap between the two curves, indicating proportion of infections requiring hospitalisation is steadily decreasing as the outbreak progresses. These are logarithmic graphs so the actual changes in proportions are quite large compared to the impression on the graph.

The table below looks at direct numbers to understand directly how relative risks changed between these two outbreaks by focussing on peak values:

It can be seen from these calculations that relative risk of hospitalisation in the peak of the 2021 outbreak was 4-fold lower compared to the 2020 peak.

It's also clear from the graphs at the top (right, red arrows) that relative risk continued to decrease beyond the peak (as the gap in grey progressively rises in 2021).

Vaccines were rolled out starting around mid 2021.