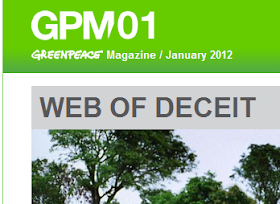 More of “creative confusion,” if you ask me.

Greenpeace is very skillful at it. It has been using this tactic for more than a decade now, with farmers as one of its main targets. Its creativity in sowing confusion is evident as it sought to prevent the Philippine agriculture sector from looking at the benefits of biotechnology and opening its doors to plant varieties that don’t need pesticides to survive.

This brand of creativity is spectacular. We recall that one of its local mouthpieces told Filipinos that biotechnology causes “cancer, millions of dead babies, mental retardation” and other scary scenarios that can only be the product of an overactive imagination.

Their creativity is awesome. Greenpeace was even able to pit Filipinos against each other. They mobilized farmers’ organizations to raid demonstration farms planted with biotech crops. They were also able to coax Filipino priests in the countryside to use the bully pulpit to scare farmers into believing that biotechnology is as much a sin against God as fornication and adultery, and that the technology causes erectile dysfunction and homosexuality.

Filipino scientists can only howl in protest over Greenpeace’s indiscriminate use of scare tactics to whip up grassroots opposition to biotechnology.

Despite the logic and science presented by Filipino scientists, Greenpeace and its local collaborators remain undeterred. After all, it appears that its goal is not to advance science, but to prove to one and all that it can make governments and companies move.

Because of this, many believe Greenpeace is not so much of an environmental advocate, but more of a lobby or pressure group. It is easy to know whom it lobbies for. One only needs to take a look at the groups providing them with funds.

Why Greenpeace hates biotechnology so much baffles the local scientific community. Through the years, it has even intensified its use of creative confusion in the Philippines.

Greenpeace’s tactics have failed miserably in the past. The Philippine government opted to look past the lobby group’s hysteria-based approach and took the logical and scientific path by approving and adopting a policy that supports agricultural biotechnology.

Greenpeace’s determination and financial might cannot be underestimated. It did not stop in the face of an outright rejection of its hysterical but creative confusion. Its patience paid off: The Court of Appeals (CA) ordered the Filipino scientific community to stop the field-testing of the Bacillus thuriengensis eggplant, a biotech crop.

The scare tactic has finally found a victim. The CA has been tricked by Greenpeace into believing that it has saved Filipinos from cancer, mental retardation, deformities and other ailments that can only be the product of the imagination.

The irony is that the very founder of Greenpeace now rejects the lobby group’s opposition to biotechnology.

Speaking before some 3,000 fellow scientists, Dr. Patrick Moore, the renowned ecologist who founded the group, criticized the very creative confusion tactic it employed. He said the “campaign of fear being waged against biotechnology is based largely on fantasy and a complete lack of respect for science and logic.”

“In the balance, it is clear that the real benefits of biotechnology far outweigh the hypothetical and sometimes contrived risks claimed by its detractors,” he added.

Data from the Internet show that Moore served as the head of Greenpeace Canada and as a member of the board of Greenpeace International. He broke away from Greenpeace many years ago because he felt the lobby group had abandoned science and is now pursuing other agendas “that have little to do with saving Mother Earth.”

If Moore is correct, is it possible that this lobby group has misled our courts into believing what its founder called “hypothetical and sometimes contrived risks?”

If that is the case, that would be tragic, as far as we Filipinos are concerned, and that would be a major victory for Greenpeace and its local collaborators.

That would prove its claim that it can make governments and companies move is true. Now, it can add the courts to the list of institutions it can bend to its will. That would also prove that Greenpeace’s tactic of creative confusion really works.