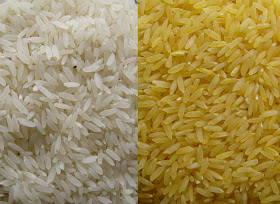 6 August, The World Tonight
Scientists in the Philippines are weeks from submitting a genetically modified variety of rice to the authorities for biosafety evaluations.
They claim it could be in the fields within a year, but national regulators will have the final say.
Supporters say it will help the 1.7 million Filipino children who suffer vitamin A deficiency - which reduces immunity and can cause blindness.
But campaigners say "Golden Rice" is a dangerous way to tackle malnutrition.
They say that it threatens the Philippines' staple food.
Continue reading the main story

Malnutrition is a broader issue, therefore the solution needs to be broader also”

Dr Chito MedinaMASIPAG
The fields at the Philippine Rice Research Institute (PhilRice), in Nueva Ecija, just north of Manila, look just like the other thousands of rice paddies that make up the Luzon landscape.
Apart from the tall fences surrounding them, you would never guess they were being used to grow rice that had been genetically modified to produce beta-carotene.
The body converts beta-carotene into Vitamin A and scientists estimate that one cup of Golden Rice could provide up to 50% of an adult's recommended daily intake.
The rice has been engineered so that the precursor chemical is expressed in the edible grain as well as in the non-edible leaves, where it occurs naturally.
Ready to roll

It has taken scientists more than two decades to boost the beta-carotene in Golden Rice to meaningful levels. But Dr Antonio Alfonso, who leads the project at PhilRice, says the product is now ready.
Speaking to the World Tonight programme, he said: "My increased confidence comes from the fact that... our data, aside from being mostly available now, are as expected and, therefore, unlikely to raise new questions or concerns on the part of the regulators...
@ BBC News - GM rice approval 'edging closer':