Andrew Kniss has this and more about the pig feeding study mentioned in the previous post:


"The second major finding of this study relates to stomach inflammation. The authors present in Table 3 of the manuscript “gross pathologies” related to various organs. For the stomach, the authors list 4 different categories related to inflammation:
The authors compared the number of pigs that fell into each category independently, and found no differences between GM and non-GM groups with respect to Nil, Mild, or Moderate inflammation categories. But the authors found that there were more pigs from the GM-fed group with “Severe inflammation” compared to the non-GM group. And this is the major finding of the study; that “GM-fed pigs had a higher rate of severe stomach inflammation.”
But this seems to me a very strange way to analyze this data. The 4 categories the authors used to classify stomach inflammation are what is known as ordinal categorical data, and are pretty common in the literature. The typical way to analyze ordinal data is to give values to each category, and conduct either a t-test or Mann-Whitney (also called Wilcoxson) test. The reason for this, is that there is structure to the data; that is, Mild inflammation is worse than Nil inflammation. And Severe is worse than the other three categories. We lose that information by separating them for analysis the way the authors of the pig study did. All 4 categories give information about stomach inflammation, and if we look only at “severe” inflammation, we lose the additional information the other categories provide. A proper analysis would include the structure of these data.
Since the authors present the number of animals in each category, we can analyze the data in a more standard way. I’ve provided the R code for doing so if you’d like to follow along at home. We’re going to use both a t-test and the Wilcoxson tests and see if the results are similar to what Carman et al. concluded. 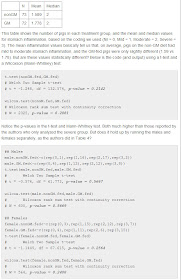 If I were to have analyzed these data, using the statistical techniques that I was taught were appropriate for the type of data, I would have concluded there was no statistical difference in stomach inflammation between the pigs fed the two different diets. To analyze these data the way the authors did makes it seem like they’re trying to find a difference, where none really exist."